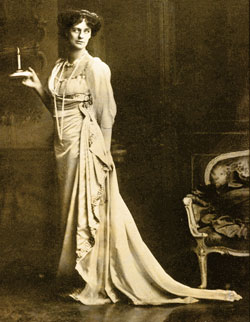 Constance Markievicz as Lady Alathea in 'The Dillettante' by Casimir Markievicz – December 1908.

The play, by the late Miriam Gallagher, centres on the correspondence between Constance Markievicz and her sister Eva Gore-Booth. After the performance, director Conor O'Malley leads a lively discussion with members of the audience.

The acting team was Mia Gallagher and Una McNulty in the roles of Constance and Eva respectively; and Declan Brennan in the role of Narrator. The reading was directed by Conor O'Malley and music was provided by Ciaran Tourish of Áltan and MJ Sullivan sang James Connolly by Patrick Galvin "... the hero of each working man ...". 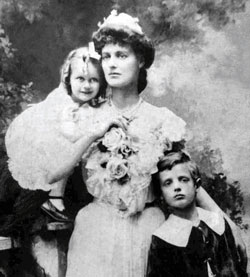 Constance Markievicz with her daughter Maeve and stepson Stanislaw, at Lissadell House, Sligo.

Mia Gallagher, who played Constance Markievicz, has worked as a deviser/performer with many Irish theatre companies, touring nationally and abroad. Mia is also the acclaimed author of two novels and a short-story collection, Shift, recently shortlisted for the 2018 Irish Book Awards. She is a contributing editor of the literary journal The Stinging Fly and in 2018 was elected as a member of Aosdána.

Dublin Lyric was pleased to acknowledge the support of the Commemoration Unit of the Department of Culture, Heritage and the Gaeltacht for these performances.

There were two readings of Girls in Silk Kimonos in November 2018, at the Booterstown Community and Arts Centre and the National Library in Dublin followed by further performances in January and February 2019 in the Mezzanine Room at the National Library, Kildare Street, Dublin.

Seán Rocks interviewed Conor O'Malley and Mia Gallagher about the play during an edition of the RTÉ Radio 1 arts show 'Arena' that was broadcast on Wednesday 17 January 2019. A recording of that interview is in the audio player above.

For more about the Miriam Gallagher collection in the library, see nli.ie

The images in this slideshow can be viewed separately in a gallery of photos.

To listen to one of the audio recordings below, click on the 'Audio' button.

Pull Down a Horseman 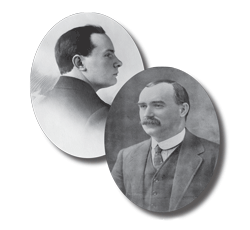 From January to November 2016, Dublin Lyric brought a series of presentations of Eugene McCabe's play Pull Down a Horseman to several venues, including Áras an Uachtaráin.

The play is about a secret meeting, between Patrick Pearse, James Connolly and the Irish Republican Brotherhood (IRB), which is known to have taken place in mid January 1916. Top of the agenda on the week of the meeting was a discussion about plans for the Rising and agreement on a date for it.

The play depicts a private discussion between Pearse and Connolly during the three days on which the meeting is known to have taken place — 19 to 21 January 1916. The outcome was that Connolly joined the IRB and committed the Citizen Army to join with the Volunteers and a date was finally set for the Rising.

The meeting has a basis in fact, with Connolly 'invited' — some argue 'kidnapped' — to join the most senior members of the IRB leadership, who wanted to convince him to join their efforts. The short one-act play is packed with historical detail, based on both the writings and known views of the two protagonists. Their arguments and ideas are pitched against each other in dramatic fashion.

The first presentations of the play were in January 2016 in Booterstown Community Centre and in the dlr LexIcon Library in Dun Laoghaire. These performances coincided with the 100th Anniversary of the three day meeting.

Visit the Productions section for more about the play, past performances, and lots more background information including photos, videos, interviews and historical articles.

Pull Down a Horseman was written by the Monaghan based playwright, Eugene McCabe for the 50th Anniversary of the Rising in 1966 and was later presented in the Abbey Theatre. The play has been regularly revived over the decades and has endured to become a classic of Irish political theatre.

While the play is based on historical research, no one knows for certain what happened at this meeting. However, as the two characters discuss, debate, argue and verbally joust with one another over whether and when to go ahead with the Rising, a fascinating insight into the two characters emerges. They were two very different people — intellectually well matched, but with very different political philosophies and perspectives.

The production, which was grant assisted by Dun Laoghaire Rathdown County Council as part of the 1916-2016 Commemoration programme, was directed by Conor O'Malley. Patrick Pearse was played by Declan Brennan and James Connolly was played by MJ Sullivan.

In April 2005 Dublin Lyric was formed around a group of people who shared an interest in presenting Irish poetic drama. From that beginning, the group has grown and with it the range of works undertaken.

The full story of Dublin Lyric, what it's about, where it came from and who is behind it is told on the About page.

The first plays performed by the group were by the Irish poet and dramatist William Butler Yeats (1865–1939). In all, eleven of his plays were produced by Dublin Lyric in its first four years. Many of these were works that are performed infrequently or very rarely.

The repertoire has not been confined to Yeats. A full list of the works presented by Dublin Lyric is on the Productions page.

If you wish to be informed about forthcoming shows, visit our Mailing List page where you can add your email address. Should your address change, that page also allows you to remove the old and add the new email address. 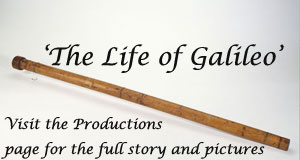 The story behind this play presented in 'The Atrium' at the headquarters of the Office of Public Works 51, St Stephen's Green, Dublin from Monday 13 to Friday 17 July 2009 and pictures taken at one of the performances are on a special 'Galileo' page within the Productions page.

Have a look and see why Galileo caused such a storm 400 years ago with this telescope! 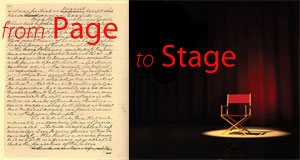 A lecture entitled, 'From Printed Page to Performance – Sean O'Casey's Within the Gates' by Dr. Conor O'Malley, was presented at the Open University of Ireland 'Sean O'Casey Summer School' on Saturday 22 May 2010.

The lecture covered the process of bringing the Dublin Lyric production of 'Within the Gates' to the Larkin Room, Liberty Hall in April 2010.

A copy of the lecture is available here as a PDF file.